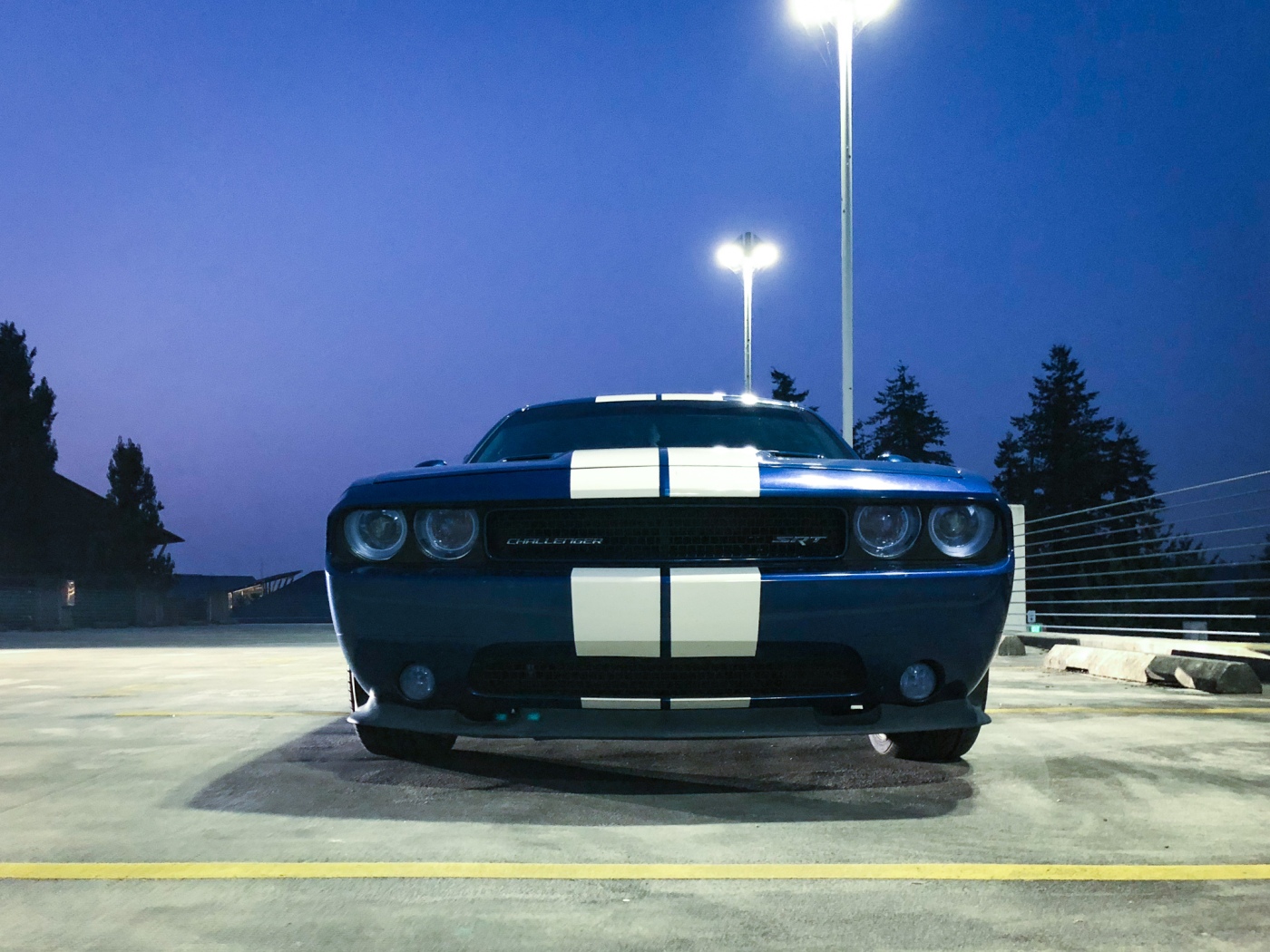 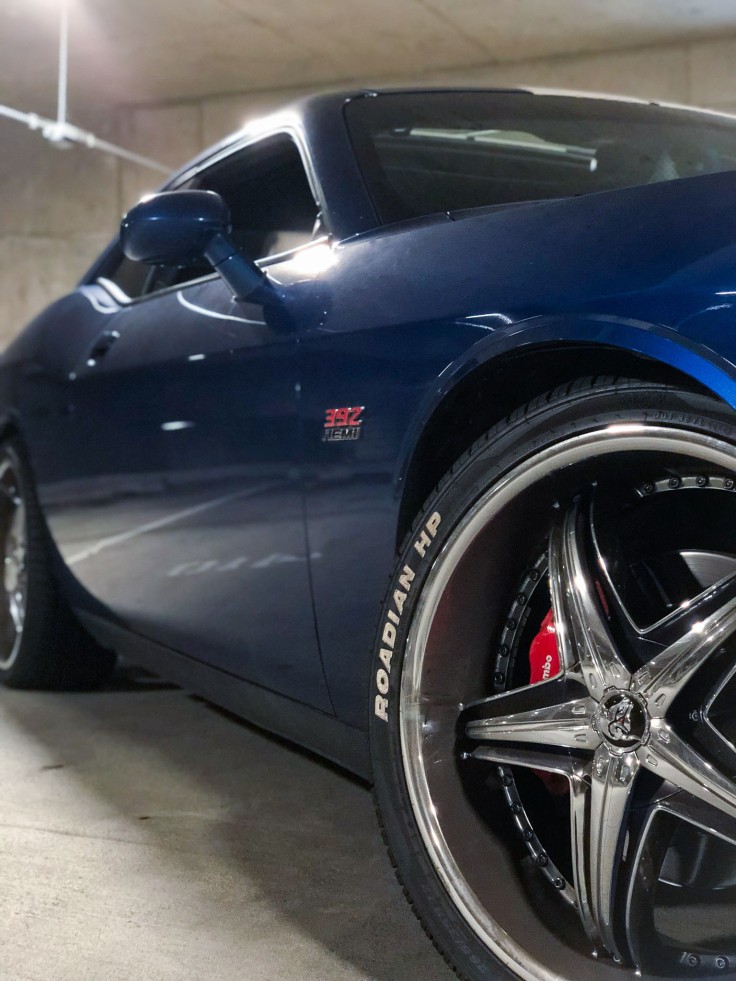 The excitement began when I first held her keys. Here lies the secret to unlocking all of her hidden powers. I never thought I could be responsible for such a beefy creature. Around her collars read one number: 392.

There’s no replacement for displacement, it has been said time and time again. Instead of being trapped in the dreadful norm of turbo-4-cylinders and 1.5 liter engines, the brutal 6.4 liter stands out the way a lion stands out from a pack of sheep. The way the 6.4L growls and crackles up and down its rev range will easily draw any unsuspecting car enthusiast’s attention-possibly even a few police officers’ as well. But that’s a good thing.

First, the looks; it is impossible to mistake such a beast for anything but a challenger. There’s the hood that extends in front of the driver’s seat for about two miles which then comes to an abrupt cliff preventing you from seeing anything in front of you. There’s the back end that puts Kim Kardashian to shame, and the grille that will consume anybody with fear-especially if they see this beast coming up in the rear view mirror. Not only does the car looks aggressive as all hell, but knowing that there is a two-ton-hunk of metal is begging for traction as the massive V8 screams “POWER” is more than enough to shove anyone out of its way. Quintessentially American.

This is no ordinary Challenger either. This is the 392, which means that this already massive engine from the standard car now has a 392 cubic inches of displacement (well, it’s 391.15 inches, but close enough). Compared to its predecessor, the 6.1L, it makes more power at 470 hp, and an enormous 470 lb/ft of torque—a whopping 50 lb/ft more. All you have to do in order to have access to all its power is push the gas pedal down… That and you need to know to drive with a manual gearbox. 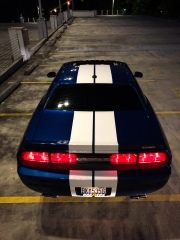 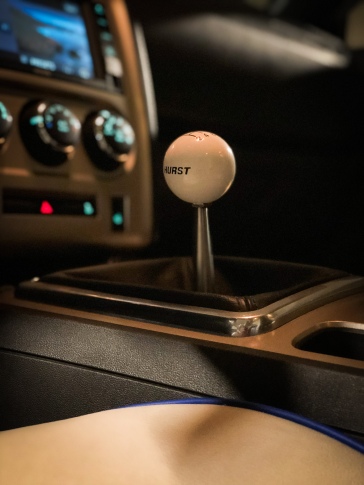 Here’s the good news, half of all 392 Challengers made are produced with a manual gearbox. With a stock pistol grip, I’d imagine the throw would be a bit shorter. But with the Hurst gear knob, I really had to work to get the right gear. Oh, and the clutch—it is heavier than two elephants mating on top of the titanic itself. In all seriousness, my left leg was cramping up two days after I test drove the Challenger. Who thought it was a good idea to throw bricks under each of the pedals? Not only do the pedals have miles of travel, but you really have to commit to accelerating and changing gears, otherwise it’ll seem like you are tickling a giant with a feather trying to get it to move. Though considering that the car is savage enough to rip you in half, perhaps that’s a good thing.

The standard Challenger is notorious for being a boat of a car, floating through corners and rolling from side to side. This 392 isn’t to that extent. 2011 model year introduced Hydroelastic engine mounts which improves rigidity of the engine bay while holding the engine down better, improving the handling of the vehicle massively. The engine mounts along with brand new strut bars and bushings for the front and the rear, the Challenger vaguely inspires confidence (though not much) through corners. It does still feel a bit like a boat, but a boat meant to be driven on the road.

Last I’d like to talk about is the interior of the vehicle. Fiat Chrysler Association has not always been known for producing the most luxurious interior, nor the most stylish. However, one aspect stands out and that would be the interior upholstery. Along with the ‘392’ stitching on the backrests of the front seats, the racing stripe motif from the exterior of the vehicle carries to the interior, which accentuates that this isn’t your boring old Challenger. I would like to mention one thing though; the backrest, particularly the lumbar support, felt a bit like I was sitting with a watermelon behind my back after some time of driving. Initially the seats felt very comfortable, a bit like a big single-seater couch—the sort your grandparents would have sitting in the center of their living room—but not very practical for seats in a performance car.
Before the end of the article, I have to say that I almost want one of these for myself. If it wasn’t for the fact that the car weighs 1500 pounds more than my 5 door hatchback, and that the clutch is the weight of a small sumo wrestler, I would consider buying one. If the car finally learned how to corner, that would be a huge plus as well. I really do like these, but I would rather not spend $40k on a car that will try and kill you if you want to take a corner a little bit faster than the suggested speed. However, if you’re in the market for a gas-guzzling, large, boxy American muscle car that will attract attention from five blocks away as you roll through Detroit, look no further. If you want the brute force, but don’t quite want to spend 6 figures on a Dodge Demon or a Hellcat nowadays, this is the one you want.